Taking the X-Factor Out of Dental X-Rays 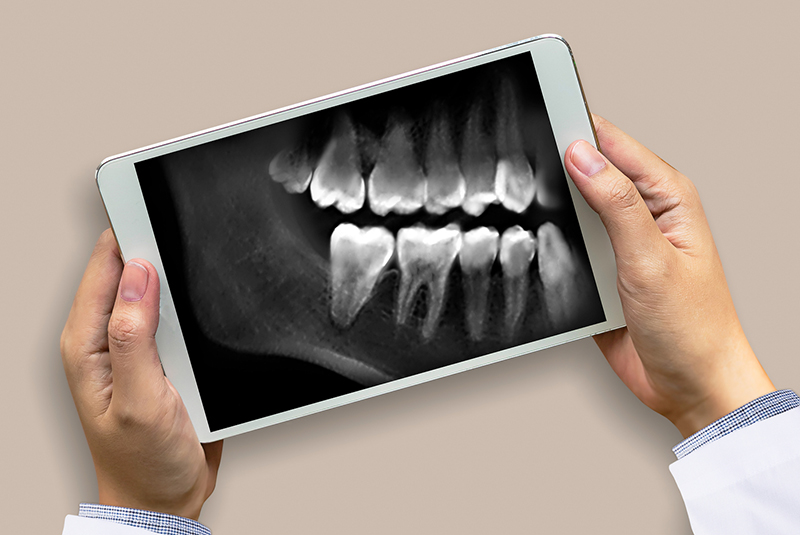 Dental radiographs, commonly known as dental x-rays, are one of the dentist’s most powerful preventive & diagnostic tools. They allow us to see potential threats to you dental health (like cavities) & plan treatment more accurately. There are several different types of dental x-rays, and it’s a good idea to know what each one is for so you’ll understand why we take so many!

Dental x-rays have been in use for a long time. A German scientist named Wilhelm Conrad Roentgen discovered x-rays in 1895. He called them x-rays because he didn’t know what they were, hence the “x”, and the name stuck. The first dental x-ray was taken just 14 days after the discovery was announced. In the last 122 years, dental x-rays have been continuously improved to be safer, gentler, & more accurate.

These are the type of x-rays patients are the most familiar with. They are called bitewing because the patient bites down on a wing-shaped sensor or film while the x-ray machine takes the image. These x-rays show just a few teeth at a time and are used primarily for detecting potential tooth decay between teeth that isn’t visible to the naked eye. Most patients get bitewing x-rays about once a year, but patients who are prone to tooth decay may get them more often. Bitewing x-rays can also be used to monitor wisdom teeth and help plan wisdom teeth removal.

Panoramic x-rays show your entire mouth in a single image, both top and bottom jaws (or arches, in dentist-speak). They show the entire tooth, crown and root, plus the jawbone. Instead of being done in the dental chair, panoramic x-rays use a special machine that the patient stands in. The x-ray scanner itself then rotates from one side of your head to the other, creating a continuous image. There are usually braces for your head and face that help keep you very still while the scanner revolves around you. Panoramic x-rays are used in orthodontic treatment planning, such as braces, and when planning extractions, including wisdom teeth removal.

Periapical x-rays take a close look at just a few teeth at a time. Unlike bitewing x-rays, periapical x-rays look at the entire tooth, from crown to root. For this reason, they are often used in diagnosing dental abscesses, which can be caused by infections or decay on the tooth root and are therefore not visible from the outside.

It’s easiest to think of cone beam CT (computed tomography) as a 3-D version of a panoramic x-ray. Just like the panoramic, the patient stands or sits still while the sensor rotates around. This scan information is then sent to a computer where special software helps generate a 3-D model of your teeth and jaws. Cone beam scans are not a typical part of prevention or treatment, and therefore aren’t done on all patients. They are often used to plan the sizing, placement and configuration of dental implants.